Somatic mutations are present in all cells of the human body and occur throughout life. They are the consequence of multiple mutational processes, including the intrinsic slight infidelity of the DNA replication machinery, exogenous or endogenous mutagen exposures, enzymatic modification of DNA and defective DNA repair. Different mutational processes generate unique combinations of mutation types, termed “Mutational Signatures”.

In the past few years, large-scale analyses have revealed many mutational signatures across the spectrum of human cancer types, including the latest effort by the ICGC/TCGA Pan-Cancer Analysis of Whole Genomes (PCAWG) Network (Alexandrov, L.B. et al., 2020 ) using data from more than 23,000 cancer patients.

COSMIC Mutational Signatures is a resource curated in partnership with COSMIC and Cancer Grand Challenges, and in close association with our collaborators at Wellcome Sanger Institute, the Pillay lab at University College London and the Alexandrov lab at University of California.

At COSMIC Signatures we identify signatures from analysis of the PCAWG dataset and through curation of specific papers. Papers are looked at particularly (but not exclusively) when there is a specific exposure which captures signatures not present in the PCAWG dataset. Please note that this catalogue of signatures is not exhaustive or a final set, but a reference set of high confidence signatures that have been curated by experts in the field. We aim to update as comprehensively as possible as new data become available and improvements are made to extraction methodologies.

This summary includes the mutational profile, proposed aetiology and tissue distribution of each signature, as well as potential associations with other mutational signatures and how the signature has changed during iterations of analysis.

Version 2 signatures (March 2015) were part of earlier COSMIC releases can still be consulted:

The current set of mutational signatures has been extracted using SigProfiler, a compilation of publicly available bioinformatic tools addressing all the steps needed for signature identification. SigProfiler functionalities include mutation matrix generation from raw data and signature extraction, among others.

Mutational signatures as a collection of operative mutational processes

Mutational processes from different aetiologies are active during the course of cancer development. They can be identified using mutational signatures, due to their unique mutational pattern and specific activity on the genome.

This is illustrated in the figure below using a framework of 6 classes of single base substitutions, and three distinct mutational processes, whose respective strengths vary throughout a patient’s life. At the beginning, all mutations were due to the activity of the endogenous mutational process. As time progresses, the other processes get activated and the mutational spectrum of the cancer genome continues to change. 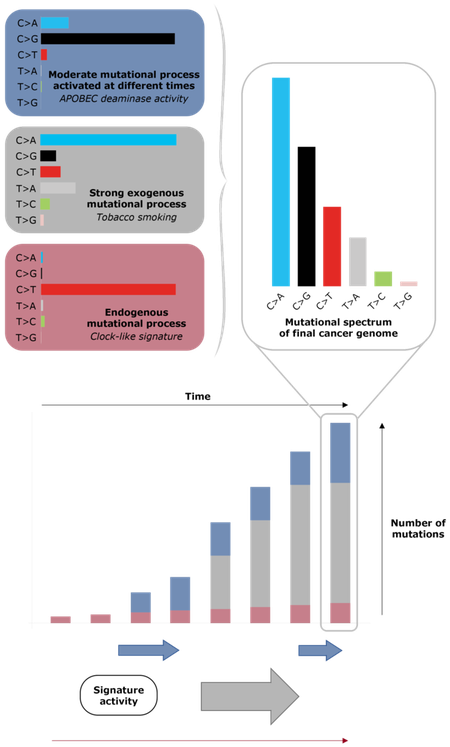